What a difference a day (to yourself) makes

Mum in a Hurry ⋅ 4 Comments

My husband got back from a 2 week work trip to the states yesterday. We were both pretty shattered and so I had a nap in the morning and then he had a nap in the afternoon and then he took Joshua out to the shops and to collect one of our dogs from a friends where I was staying for the 2 weeks.

But today, after Rugby Tots, I went out shopping. I didn’t really intend to be out all day but I kind of figured I deserved a treat and to take my time and not rush back. I left the house around 11.30am and didn’t get back much before 4pm.

I went into Guildford and parked up the top in York Road. I like parking here because a) you get a ticket and pay on your return so you don’t have to worry about time. Also I like it because you walk from the top, down through the shops, browsing as you go. First of all, I popped into a very nice looking stationery shop. It was quite small and new and had lots of lovely pens, notebooks etc organised by colour. All pinks, all greens, all pale blues. Etc. I was in heaven. I so could have spent a fortune in there. However, I managed to get away with only spending £2 on a pink rollerball pen to keep in my handbag. I thought about buying a notebook but manage to restrain myself as the truth is that I do most things on the computer or my phone. So a notebook is something that I would carry around but never use, much as I like the idea of it. 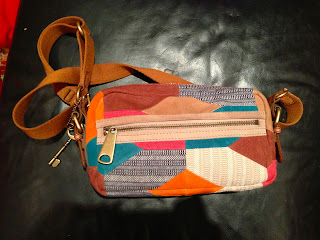 After that I wandered down the high street. I popped into a nice looking small shoe shop, but there wasn’t really anything I liked so I moved on. I went to House of Fraser next. I intended to look at purses. I thought I might like something a bit smaller for the handbag (see picture) that my hubby brought me back from the states but I couldn’t see anything I liked. On my way in, I got cornered by the Estee Lauder counter. Actually that’s not true. I was standing gazing at the free gift when a lady asked if she could help me so I asked what was in the free gift and what I would have to buy to get it. 2 things apparently which would probably add up to £40 or more so I told the lady I would mull over if I could afford anything while I browsed purses. I had pretty much decided that I couldn’t afford it and was heading to the exit when I passed the Benefit counter. I couldn’t resist. I had to look. And the lady there was so lovely and I got chatting to her and in the end I asked her if she did makeovers. She said she did and did I have time now, which I did (I explained about hubby just back from 2 weeks and this being first chance for a bit of me-time). So she went about making me pretty with all her potions and pretty makeuppy coloury things.

After my little makeover, I wandered along to M&S. I got a pair of jeans, a top, a nice long dress for work and a pair of new shoes (19.99 – bargain). As I was looking at myself in the mirror feeling nice to be wearing nice clothes, I decided that confidence has to come first. It is no good to try to even think about dietting, starting an exercise regime when I feel shattered, ugly, fat. So some nice clothes, some nice makeup, a bit of time to myself. That’s the first step. Make me feel good as I am now.

After M&S I went to get my nails done. I had an idea about getting Hello Kitty on my nails. Hello Kitty is Lala’s latest craze. I googled “Hello Kitty nails” on Google Images and I found this image: 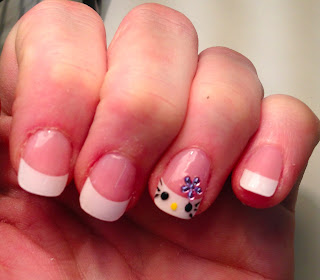 They didn’t have a bow so they used a flower instead. I think it looks cute! Lala did like it very much. So much so that when I got home and showed her, she tried to take the nail off. “Lala’s Hello Kitty nail” she said! haha!

After having my nails done I went to Cafe Rouge and had a goats cheese salad and a glass of wine, followed by a latte while I read a book on my iphone kindle app and caught up on Facebook. It was blissful. The whole day. I wished it could last a bit longer. But it made me feel like me again.

Tomorrow I’m going to wear my new dress and new shoes and put some makeup on and do my hair. The pressure is off. Ben is here now. Its not all on me. I didn’t mind being on my own or in charge for a while. But by the middle of the 2nd week it had really worn me down – being the only one there to do bedtime and morning times and never getting an extra 15 minutes in bed while the other one deals with the kids. Not being able to get in the shower and get dressed without little people coming to keep you company! Its good to have him back. It feels like a huge weight off my shoulders.

4 Thoughts on “What a difference a day (to yourself) makes”