So. Hubby is back from his monster shopping trip. Strangely he didn’t come back with that much. Benefit of being an impulse buyer is it doesn’t take me long to get what I need/want. He, however, is NOT an impulse buyer. Which is why he spent a good 3 hours out today shopping. Also he seemed to go to lots of different places. I would probably have gone somewhere that I could get most of the things that I needed in one fell swoop. I hate shopping. I love shopping for fun things for me and for the kids but I hate the pressure that Christmas and Birthdays put on you to get something perfect.

Well, I had a bit of a lie in this morning. Didn’t feel like that much of a lie in as the kids woke up late (8.15am) and then my hubby got up. I often feel like I’ve been cheated if he gets nearly as much of a lie in as me when its my turn! lol. I know that isn’t logical but I’m competitive like that and I feel that he should be up at 6am and I should get all that time in bed on my own (spreading out all over the bed, sleeping on his pillow – which invariably always seems more comfy than mine even if I’ve swapped mine for his the previous night!!!). Anyway, Lala came up to see me in bed in the morning. I thought it was 10am but I guess it must have been a bit later as it was 11am by the time I actually got out of bed. She chilled in bed with me and played with her iPhone (my old one). 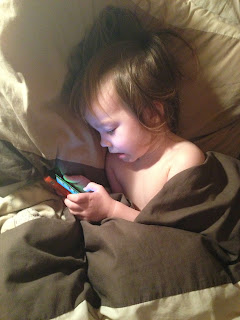 Then I got up and hubby decided that before I went out to do my shopping (for his christmas stocking and Lala’s) he was going to nip to the supermarket to get some bread flour to make some fresh bread with (he’s a bit Jamie Oliver like that). However, Joshua insisted on going with him and Lala saw Joshua put his shoes on and wanted to go too and I didn’t think it was fair to make Ben take them both. Not for xmas shopping so I said I’d take her to do my shopping (she probably wouldn’t remember the presents I’d bought her). So I chucked her in her Peppa Pig wellies (no socks. I’m a terrible mother) and threw her in the car. I didn’t REALLY throw her in the car. I secured her gently without whacking her head on the way in.

We went to Enchanted Wood which is a LOVELY toy shop. She was quite excited about going in but I think I might have been a tad MORE excited than she was. Especially as they have a WHOLE WALL of Sylvanian Families stuff. I used to love those little figures when I was a little girl. So I have taken it upon myself to make sure she does not miss out on that joy!!! lol. Nothing like living vicariously through your kids!!! Here she is trying to figure out the little stools at the Lego station in the shop: 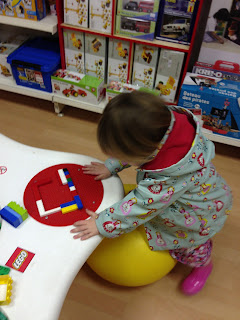 This is what I bought her…. I can tell you cos I know you won’t tell her: 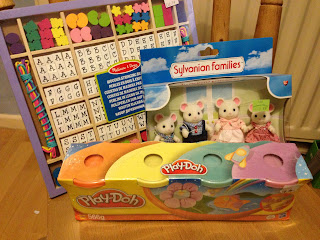 I also got her a little Hello Kitty toy which she demanded as soon as we’d paid for it. Well, technically, she got it before I’d typed in my pin but the shop assistant didn’t seem to mind. Here it is before and after she got home and painted it blue!!! 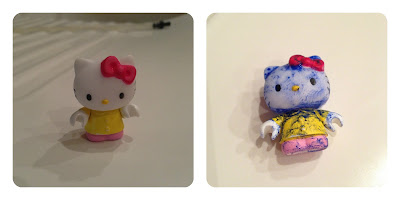 Actually the photos were taken the other way around. I hadn’t got a photo of it before she painted it but I thought it would sound silly to say “here is the picture of Kitty painted blue” and “Here is kitty after Mummy made her all clean again in the sink”. Not that you care… Will stop rambling now.

Here is a picture of my darling daughter…. this is why I normally hide the paints from her: 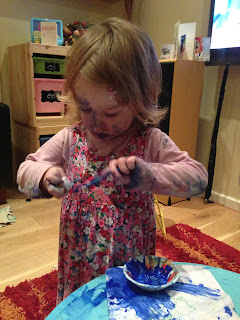 Joshua did some painting too. In fact, he was painting first as she was in bed and I thought I’d be safe. But then she woke up and found them before I’d had a chance to put them away. Here is Joshua painting Darth Vader. Yes, I know it doesn’t look much like Darth Vader but he was happy and painting something without screaming about it being rubbish so I just let him get on with it. 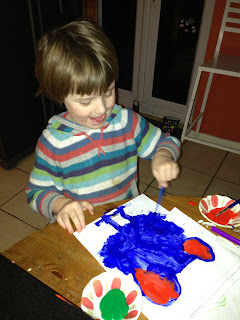 Oh, forgot to mention that after Enchanted Wood me and Lala went to Sainsburies. I got a big trolly which she sat in for about 5 minutes and then insisted on walking in front of the trolly – basically leading me. It was very funny. I got much less than I probably would have because I had to run after her. All I got was some chocolate croissants for me (and hubs…) some chocolate donuts for her (and her brother) and…. a Radio Times. Got to get the red marker pen out and circle what I’m going to watch this Christmas. Its my tradition. Wonder how many other people have that tradition. Here is Lala leading me around the shops: 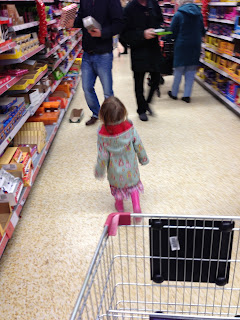 She was very funny and almost got run over several times by manic xmas food buyers (anyone would think the world was going to end – oh no, that was yesterday!).

I got her back to the car and realised that she no longer had her little Kitty that I’d just bought her. So I had to race back with her to trawl the aisles. Thankfully I found it by the chocolate croissants. She must have seen the donuts and lost control of her limbs. Happens to the best of us!

Well, I’m now going to take my glass of wine. 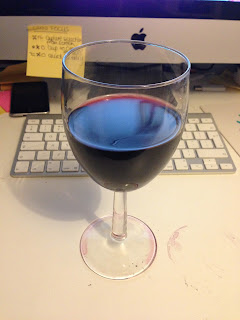 And go relax in the bath as I feel I deserve it. Can hear a bit of screaming going on downstairs, but its not my problem. My childcaring ended when hubby got back!!!